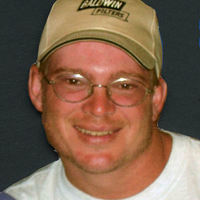 Chad J.  Brown, 45, of Stromsburg, NE. passed away Saturday, February 8, 2020 in Stromsburg.
Chad was born November 27, 1974 in Lexington to Robert H. and Judy (Petrick) Brown. When Chad was three months old his mother passed away and his Dad married Carol Ann Schroeder.
Chad attended school in Lexington and graduated from Lexington High School with the class of 1993.
Chad was united in marriage to Jessica Gellinger on December 13, 1997 in Juanita, Nebraska. Three children were born to this union; Morgan, Madisen and Blake.
Chad worked for many cow-calf operations in Henderson, Aurora and the Stromsburg areas.
Chad loved helping his kids with their cattle and fishing. Chad was a man that would always be there to help a friend with anything they needed.
Chad leaves to mourn: his wife Jessica of Stromsburg; a son, Blake of Stromsburg; two daughters, Morgan and fiancé Colton Maiwald of Modell, Iowa and Madisen of Stromsburg; his father, Bob Brown of Lexington; mother and father-in-law, Tom and Vicky Gellinger of Beemer; his “adopted” daughter Stephany Shaw and her children; Beretta “B” & Dominic; three brothers, Ronnie Taylor of Lincoln, Mark and wife Leslie Brown of Gordon and Randy and wife Julie Taylor of Lexington; four sisters, Kathy and husband Bill Reagan of Las Vegas, Nevada, Gina Sohn of Atlanta, Georgia, Sheri and husband Larry Maggart of Colorado and Melissa “Pete” and husband Donnie Woodside of Lexington; one sister-in-law, Sara Brown of North Platte;  he is also survived by many nieces, nephews, great nieces and great nephews as well as extended family and many  friends.
Chad was preceded in death by his birth mom and his mother.
A Celebration of his life will be held Monday, February 17, 2020 at 2:00 p.m. at the Reynolds-Love Funeral Home in Lexington with Pastor William Ohlmann, officiating.
There will be no visitation or memorial book signing, as the family is honoring Chad’s wish for cremation.
Memorials are suggested to his family for later designation.
Reynolds-Love Funeral Home in Lexington is honored to be assisting the family with arrangements. Please share online condolences with the family by visiting:reynoldslovefuneralhome.com