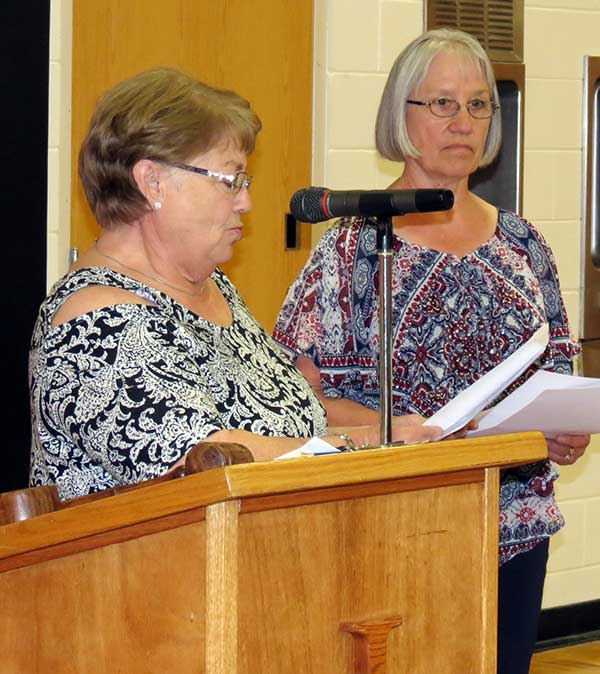 The 50 year class conducts the memorial service during the gathering. Pat (Ramsey) Longly (1969) with Janet (Libal) Schlattmann (1969) read the names of LHS/St. Ann's alumni who have passed away since last banquet.

The 115th Annual Alumni Banquet was held in the Lexington Sr. High Auditorium on June 17, 2006. Honor classes were class years ending in '6'. We enjoyed a meal catered by Ruby Tuesday of Kearney. 303 meals were served quickly by the City of Lexington Relay for Life Team and a mother/daughter team.

Singing the "Orange and Black"

2006 LHS Alumni Banquet Photo Gallery. Click into one of the photos below to begin paging through album. Photos by Scott Anderson.

Hundreds of Lexington Alumni ascended upon Lexington last weekend. Many coming from as far away as Florida and Alaska. An eighty-eight year old member of the Class of 1938 drove with his wife and son from Fulton, IL. They all have their own reasons for coming back to Lexington, their childhood home. But most come back for the friendships, to reminisce and to renew old relationships. All hold Lexington dear in their hearts. One letter to her classmates of 1938 says "My children say that they were reared with the idea that Lexington is the Mecca of the universe". There is comfort in returning home.

Friday evening most classes began their festivities with get-togethers all over the area. Many toured the Middle School and Elementary Schools Saturday morning and afternoon. The high school was the destination of approximately 320 alumni and their guests Saturday evening for the 117th Annual Lexington High School Alumni Banquet. Several classmates walked the halls at the high school prior to the banquet which began promptly at 6:00 p.m.

As folks were entering the gymnasium they were entertained by live piano music by Gerhart 'Gerry' Kopf, 88 year old member of the Class of 1938. Kopf, a self taught musician entertained his classmates earlier in the day after their luncheon at Park Avenue Estates. He played songs by memory, no sheet music needed. His classmates would request songs of their day and he would instantly begin playing to the delight of all in the room. When asked 'how can you do that?' Kopf answered 'it comes from beginning at a very young age, much like when you learn to talk'. He admits his family was musical, but he really had no formal teaching. He credits his high school music teacher Mr. Ewing for a great deal of his ability and in later years incorporated much of Henry Mancini's techniques into his repertoire.

When Kopf found out that the alumni sing 'The Orange and The Black' (the original song of Lexington High School), he offered to play as the crowd sang. He also played the melody for 'Cheer, Cheer, For Old Lexington' for the younger classes. When asked if he could come back every year and perform, he replied, 'Well, I AM eighty-eight you know." He may be eighty-eight, but he doesn't let that slow him down.

The business meeting part of the banquet was next with minutes of the last meeting noted and approved, treasure's report noted and approved. Election of Officers with Gene Libal stepping down from Presidency, William Fellers III stepping up to President and Corrine (Brandenberg) Anderson continuing on as Secretary. Nominations for Vice President were requested of the crowd, but none offered. Business meeting was closed at the time.

'Change' seemed to be the recurring theme of the night as the Honor Class Speakers took the stage.

Gerhart 'Gerry' Kopf for the class of 1938 compared price/cost comparison differences between then and now. He also spoke of the challenge of living in the 30s and how he and several of his classmates had to miss going to school as they lived far out in the country and could not afford to drive in every day or pay for in-town boarding ($5 per week). Kopf had to miss an entire year of school because of that.

He remembers good times too: Harold Hirsh and his top-heavy sedan with graffiti on the sides "She may be old, but she still gets hot", and "Don't laugh lady, your daughter may be in side". Hirsh could make u-turns in cul-de-sacs on two wheels with that car!

He remembers being practically the only boy in typing class and was able to refine his typing skills fairly well. Grateful for the typing class, he now communicates by e-mail with his children scattered all over the United States, sometimes as many as eight times a day.

In 1938, Johnson Lake was just being formed, Sinatra and Carson were unheard of and now both are gone. Later in life Kopf worked for a hybrid corn company and one time the company hired a young magician from Omaha for entertaining. He was billed as the 'Great Carsoni'. Several years later while going through cancelled checks the secretary found the cancelled check written for $5 to Johnny Carson.

Kopf also gave some predictions for our future and advised the audience to invest in agriculture, as feeding the world is going to be come more important as our populations increase.

Harley Richardson represented the Class of 1948. He told the crowd to 'eat dessert first, life is uncertain'. He impressed the importance of this due to the recent death of one of their classmates and reunion committee members, William 'Bill' Karr who passed away in May. Mr. Karr was so looking forward to this reunion. His wife was in attendance with Bill's class.

Richardson also spoke of change and quoted J. F. Kennedy 'Change is the rule of life'. He spoke of many of the changes over the years in Lexington. He also noted that of all the businesses that have changed in downtown Lexington that two have remained the same: Barmore's Drug Store and The Majestic Theater.

Jim Brown spoke for his Class of 1958. 'You know the book written by Hillary Clinton, 'It Takes a Village to Raise a Child', well Lexington was the village, and I was the child. He told the crowd he was an orphan and lived in Holdrege at Nebraska Children's home until an uncle came and brought him to Lexington to live prior to entering Jr. High School. Brown took the opportunity to thank all involved in raising him up. Thanks to Lymon Stuckey, a banker, who loaned him $250 for college expenses, Lee Sanks, who worked at Ayers Clothing, for his wisdom and advice. Thanks to all the parents of his classmates who always welcomed him into their homes for meals and family time.
Some of his fondest memories of great times are skating parties at ice rinks provided by the city in the winter at some of the parks in town; sponsored meals at churches; pep rallies at school and painting on store fronts before games. Some of their hangouts were Stuart Drug Store soda parlor with Green River Fizzes and Hot Fudge Sundaes; Parkway Café; Cruising up and down Main Street, poker games, playing basketball at night at Kiffin's because they had an outside light. A&W and the Drive-In Theater were other fun hang-outs for the class.

He thanked his classmates for their part in raising him up and as he left the stage, he received a standing ovation from his 'family'.

For the Class of 1968, Mike High took the podium and asked the question 'Why do we come back for reunions?' Recalling the night before at a reunion celebration at Johnson Lake, High said 'after the thunderstorm passed and the clouds broke, we watched the full moon come up over the lake'. It was Paradise! Coming back home is paradise.

He also spoke of Lexington Pride, pointing to the large orange and black graphic on the wall behind him. Pride in community, pride in school system.

And to quote Garrison Keillor, "Be well, do good work, and keep in touch" with one another.

Larry Doughty for the Class of '78 was the star of the night when he gave a very entertaining, rap-like speech, sometimes singing, sometimes talking, and when he walked away from the stage, he received a standing O by his classmates and many others. He said 'if anyone would have told me on June 1, 1978 I'd be the speaker of my class for our 30th Class Reunion, I would not have believed it. I didn't think I'd live to see this day.' He talked about coming to a turning point in his life and about 2 years ago came back home to Lexington to better himself as well as those around him.

Mike Bailey, Class of 1988 revisited the decade of the 80s starting with the hostages in Iran, MTV, Punk Rockers, Valley Girls, hair bands like ACDC, Aerosmith, KISS; Michael Jackson's Thriller, Jr. High dances with girls on one side and boys on the other side of the gym; break dancing. New Holland plant closed in '84 and with that the class said good bye to many classmates that had to move away.

Some fun memories include loading a 2-door Chevette with 13 classmates and go through the drive-thru at McDonalds. Cruisin' Main Street in Lexington or Kearney.
The Class of 1988 graduated 104 students of that, three have passed away. Many classmates are or have served in the military. Bailey gave tribute to them and all of the service men and women who are fighting now and have fought for our freedom to enjoy times like this.

Brad Carpenter represented his Class of 1998 and thanked all the class representatives and alumni association for making the weekend possible. Carpenter thanked former teachers also.

Ten years after graduating, 'we were able to pick right up where we left off with one another'.

They remembered two classmates who have passed away, Ryan Guill as one of them. Speaking to Ryan's mom Linda Guill (Class of '68) in the audience, 'We miss his bright smile and quiet personality, but he is not forgotten.'

A solemn Memorial Service was conducted by Bill and Velma (Deeter) DeLap, Class of 1958. Sixty-four names were called out in order of their class year. A vase on the stage filled with red roses to represent all deceased graduates in past year and one white rose to represent any we may have missed.

Acknowledgements were made to several companies, individuals and organizations that help make this event possible. The Banquet was then closed with the singing of 'The Orange and The Black' and 'Cheer, Cheer for Old Lexington.'

The Alumni Association will now start preparing for the 118th Annual Lexington High School Alumni Banquet to be held on June 20, 2009. The Association will continue to accept nominations for Vice President and Secretary positions. This is a very worthwhile organization; please consider being part of it. If interested, please call Corky Anderson at 324-2128.

The red roses in the vase represent all alumni we have lost this year; the one white rose represents any we may have missed.

2010 LHS Alumni Banquet was held on June 19, 2010 at the Lexington High School Gymnasium. Almost 400 attended the banquet with Lundgren's Catering and BBQ as our caterers. Below is a photo gallery of our class speakers and some of the class reunion photos. Click into a small image to see the larger image, then arrow through the gallery. 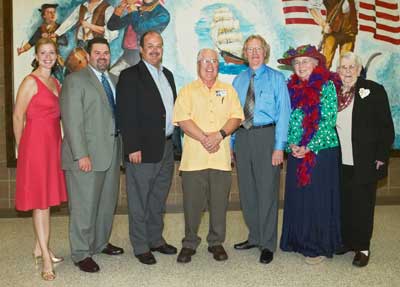 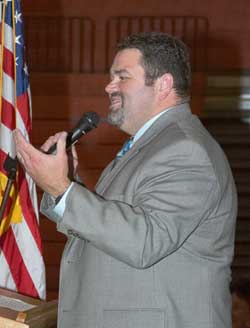 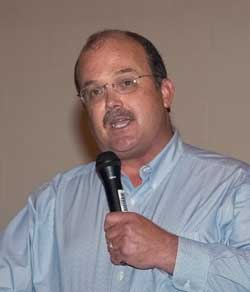 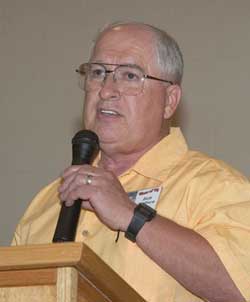 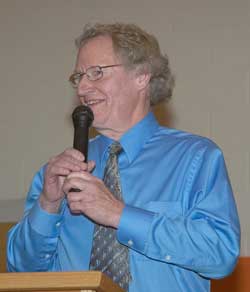 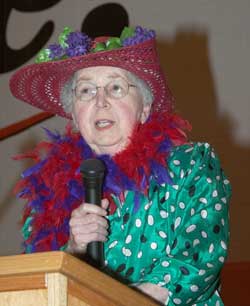