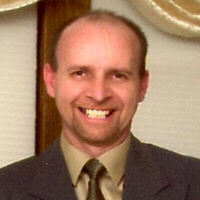 Kelly Ryan Messerschmidt, 56, of Oconomowoc, Wisconsin died July 14, 2020 at home. He was born November 21, 1963 to Charles (Chuck) and Maydelle (Echtenkamp) Messerschmidt in Wayne, Nebraska. He was baptized December 1, 1963 in Grace Lutheran Church, Wayne. The family moved to Lexington, Nebraska in 1967. On April 23, 1978 he was confirmed into the Lutheran faith at Trinity Lutheran Church, by Rev. Warren Smith.

Kelly graduated from Lexington High School on May 16, 1982. He loved the theatre and plays and won numerous awards in speech and drama. He was the state president of the Nebraska High School Student Councils and the Nebraska state representative to the United States Senate Youth Program in Washington D.C. In May of 1987 he graduated from the University of Nebraska, Lincoln. Following graduation he was employed by Nebraska Book Company and lived in Knoxville, Tennessee. Later he moved to Minneapolis, Minnesota and worked for Wilson Leather Company and the Brady Corporation. The Brady Corporation then transferred him to Oconomowoc, Wisconsin.

On October 7, 2017 he married Jane Marie Barrett in Estes Park, Colorado. The couple remained in Colorado and after a year moved back to Oconomowoc, Wisconsin where he was employed by the Rexnord Company. Kelly loved music, especially playing his guitar. He loved the woods of Wisconsin and the mountains of Colorado- taking many walks and drives through them. When he was young going to the Platte River was one of his favorite things to do. Fall was his favorite time of the year and was enchanted by every sunset that he saw. Kelly was a friend to all and spending time with his dad helping him put out Christmas decorations was important to him.

He fell in love with his soulmate and their time together was too short on this earth. He will be so very missed and always loved.

Memorials are kindly suggested to Trinity Lutheran Church or the provider’s choice.

A Celebration Of Life Service will be held on Friday, July 31, 2020 at 11:00 a.m. at Trinity Lutheran Church in Lexington with Pastor Rob Kuefner, officiating.

There will be no visitation, as the family is honoring Kelly’s wish for cremation. Burial will be held at a later date.