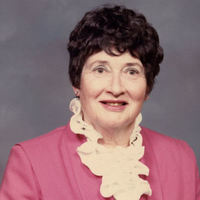 Rosalie Stuart Franklin, 99, of Overland Park, Kansas, formerly of Lexington passed away on Friday, October 25, 2019 at Morningside Place in Overland Park.
She was born to Leonard J. and Winifred (Seeger) Stuart on November 10, 1919 at Lexington, Nebraska. She joined an older brother, Hugh Stuart, was born a few years after her. She grew up on a farm just east of Lexington. She attended country school for eight years and then went to Lexington Public High School from which she graduated. After graduation she attended the University of Nebraska-Lincoln where she majored in Art.
Upon graduation from UNL she moved to New York City in order to further her studies in art. While living in New York she met Dr. H. Charles Franklin. They married in 1945 and three children were born to this union. In 1948 her husband left the service and started a practice in Seattle, Washington. Rosalie lived there until June of 2015, when she moved to Overland Park, Kansas to be near her son.
She is survived by her children, James E. “Jim” (Judy) Franklin of Overland Park, Kansas, Jane L. Franklin of Port Townsend, Washington and Amanda “Mary” C. Franklin (Dan Nord) of Seattle, Washington; also a number of grandchildren.
Rosalie was preceded in death by her parents, brothers and husband.
Mass Of Christian Burial will be on Tuesday, October 29, 2019 at 10:30 a.m. at Reynolds-Love Funeral Home in Lexington with Father Matt Koperski, officiating.
Visitation will be held on Monday, October 28, 2019 from 6-7 p.m. with a Rosary to follow at 7:00 p.m. at Reynolds-Love Funeral Home in Lexington.
Burial will be at St. Ann’s Catholic Cemetery in Lexington.
Memorials are suggested to St. Joseph Carmelite Monastery, 2215 NE. 147th St. Seattle, WA, 98155 or Mount Michael Benedictine Abbey, 22520 Mount Michael Rd. Elkhorn, NE 68022.
Reynolds-Love Funeral Home in Lexington is honored to be assisting the family with arrangements. Online condolences may be directed to the family by visiting: reynoldslovefuneralhome.com