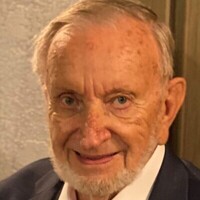 Charles “Chuck” Messerschmidt Jr, age 86 of Lexington, NE died peacefully at home June 22, 2022 after bravely battling pancreatic cancer. He was born February 10, 1936, to Charley and Blanche (Kruger) Messerschmidt in Sioux City, IA. He was baptized February 29, 1936 at Grace Lutheran Church in Wayne, NE. He was confirmed on May 28, 1950 at Grace Lutheran Church also in Wayne, NE.

He attended Wayne High School in Wayne, NE and graduated in 1954, then attended Wayne State Teachers College, graduating in 1958 with a bachelor’s degree in music education.

On June 16, 1957 he married Maydelle Echtenkamp at Grace Lutheran Church in Wayne, NE. They recently celebrated their 65th anniversary. God blessed their marriage with two children, a daughter, Carla and a son, Kelly.

An avid musician, his passion for music spanned many genres from church music to big band to jazz. He loved playing and teaching music and his music will live on through all the people he taught and inspired! He was a member of and organist at Trinity Lutheran Church for 55 years. In addition, he has played the organ at various local churches and for decades has played Taps for military funerals. He was the leader of the Night Caps, his dance band that played in many venues around the state of Nebraska. He had been president of Trinity Lutheran Congregation and continued to serve as an Elder of the church. He also served on the Lexington City Council from 1976-1980.

Chuck loved spending time outside working on his lawn or in his garden and pumpkin patch. He enjoyed time with his grandsons, especially outside building snowmen and doing woodworking projects with them. He loved decorating the outside of the house for all holidays, especially Halloween and Christmas. After he retired you could find him in his workshop refinishing antiques or putting a fresh coat of paint on houses around Lexington. Chuck loved to bring a smile to the face of everyone he knew always taking the time to share a story!

Besides his parents, he was preceded in death by his stepmother, Elinor Messerschmidt and his son, Kelly Messerschmidt.

Cremation will follow the Celebration of Life service and burial will be held at a later date.

Memorials will go to Trinity Lutheran Church and other organizations to ensure that his love for church music continues.

Reynolds-Love Funeral Home in Lexington is honored to be assisting the family with arrangements.