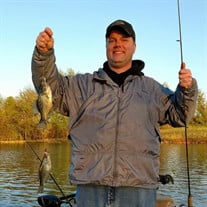 Michael Drew Stoddard, son of Gerald and Shirley (Puppe) Stoddard, was born April 30, 1981 in Auburn, Nebraska. Mike spent most of his youth in Lexington, Nebraska, where he graduated from high school. Among other activities, Mike was on the Lexington football and wrestling teams. In 2006 he graduated with a criminal justice degree from Peru State College where he also played football.
On May 29, 2010 Mike was united in marriage to Danni Elizabeth Montgomery in the Victorian Garden at Wildwood in Nebraska City, Nebraska by Rev. Ken Tubbesing. The couple was blessed with a daughter, Charlotte Rose Stoddard, and lived in Nebraska City.
Mike worked in his early years at Sapp Brothers Truck Stop and for Pieters Construction and Magnolia Metal Corporation in Auburn. He took a job with Union Pacific Railroad which he loved because of the places across the country it took him. He was a hard-working man regardless of the job.
In his time at home he loved being with his family often enjoying movie nights at home or going camping and teaching his daughter how to fish. He liked fixing things up around the house and tinkering out in the garage or doing small maintenance to the vehicles. He found mowing the yard with a push mower to be very satisfying and relaxing. Mike was an avid outdoorsman who enjoyed fishing, hunting and camping. He loved watching fishing videos to learn the latest techniques. He was an avid fan of the Huskers and Chiefs in football and the Royals in baseball.
Mike received the news of a diagnosis of cancer in his head and neck in May of 2017. After surgery and radiation his doctors declared him cancer free, but in June of 2018 he noticed an unusual pain in his back. After surgery near the end of August, doctors discovered the cancer had metastasized to his right lung. He was admitted to the hospital on October 3rd and not released until the 17th. Mike found himself back in the ER at Methodist Hospital in Omaha, Nebraska on October 28th, 2018. It was there God called him home on Tuesday, January 1, 2019 at the age of 37 years, 8 months and 2 days. Throughout his battle with cancer he fought with courage and strength. His father Gerald and mother-in-law Sarah Montgomery preceded him in death.
Mike is survived by his wife Danni and daughter Charlotte of Nebraska City; mother Shirley Stoddard of Nebraska City; father-in-law Mike Montgomery of Eagle; sisters Vicki Reed of Council Bluffs, Joyce Jones and husband Bob of Claremore, OK, Sandra Stoddard-Murphy of York; brothers Eddie Jarrett of Lincoln, Marty and wife Melissa Stoddard of Omaha and Brian Stoddard of York; sisters-in-law Julie and husband Chad Daffer of Valley, Maggie and husband Steve Garcia of Houston; brother-in-law Steven and wife Julie Weaver of Kansas City, MO; many nieces, nephews, other relatives, and many friends.
A funeral service was held Monday, January 7, 2019 at Salem United Church of Christ near Steinauer, Nebraska, officiated by Rev. Ken Tubbesing. Casket bearers were Adrian Robertson, Chris Burki, Eddie Jarrett, Marty Stoddard, Trevor Dinovo, and Steven Weaver. Burial was in the church cemetery.