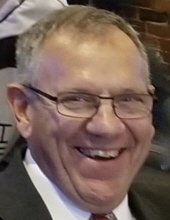 He was born on September 22, 1957 at Henderson, Nebraska to Willis and Eileen (Schumm) Wescoat. He grew up in Lexington and graduated with the class of 1975. After graduation he attended Tennessee Temple College. He worked at Valley Sales and Orthman Manufacturing in Lexington.

He was united in marriage to Debra Gascho Bordenkircher on November 17th, 2007 at First Baptist Church in Cairo. The couple lived in Cairo where he was employed by MH Equipment and had a lawn mowing business until his death. They took in a great nephew and niece, Travys and Ashlyn, in 2010 to raise as their own children.

He was a member of First Baptist Church of Cairo. He served as an elder in his church. He was also active in the First Baptist Church in Lexington when he lived there and preached there many times over the years. He loved his family and will be missed dearly. His smile was infectious.

Survivors include his wife, Debi of Cairo; son, Travys and daughter, Ashlyn of Cairo; son Chad (Ming Yip) Bordenkircher and granddaughter, Brielle of Covington, LA and Ryan Bordenkircher of Boelus; daughter, Megan (Nate) Wilhemi and grandson, Atlas of Alda; sisters Maxine (David) Vieth of Grand Island, twin sister, Pam (Mark) Rodriguez of Bellevue, Ruth Bohlen of Broken Bow and Amy Tallon of Lincoln; brothers, Mike Wescoat of Lexington and Pat (Rhonda) Tallon of Shelbyville, Kentucky and many nieces, nephews and friends whom he loved very much. He was more than just an uncle to his nieces and nephews. He had two grandchildren with a grandson due in 2021.

He was preceded in death by his parents, one brother, William, grandparents, Adeline and William Schumm and Charley and Gladys Wescoat, one grandchild one great niece and several aunts and uncles.