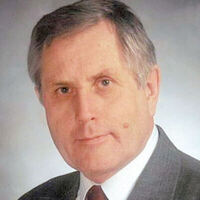 Donald Louis Ward was born in Lexington, Nebraska to Cecil and Anna Ward on April 19,1934. He passed away at home in Westminster, Colorado surrounded by his family on August 22, 2020.

He attended Doane College before joining the Navy in 1959. In 1963, he began a career as a cheese buyer for Swift Packing but quickly climbed the career ladder to be a manager for numerous distribution units around the country for a total of 26 years. After moving back to Denver, he continued to sell meat for Anderson Boneless Beef for another 25 years. He was one of the kindest men alive, and was very tolerant and considerate. He loved camping, hiking, fishing with his grandkids, horses and growing his own corn. He made his legacy as a loving father, husband and grandfather.

A graveside service with military honors will be held Saturday, September 5, 2020 at 11:00 a.m. at the Christ Lutheran Cemetery, northwest of Buffalo with Pastor Victor Rasmussen, officiating.

You are encouraged to bring a lawn chair with you.

Reynolds-Love Funeral Home in Lexington is honored to be assisting the family with local arrangements. Online condolences may be directed to the family by visiting: reynoldslovefuneralhome.com