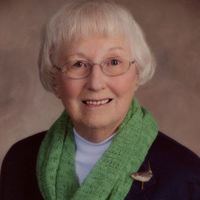 LaVaughn Lauby, 93 of Lexington passed away Wednesday, November 6, 2019 at CHI Good Samaritan Hospital in Kearney.
LaVaughn was born July 7, 1926 in Elm Creek, Nebraska to Paul and Belva (McMichael) Brodine. Her family moved to the Lexington area in 1937 and she graduated from Lexington High School with the class of 1943.
On June 4, 1945 she was united in marriage to Michael E. Lauby in Lexington. To this union five children were born: Gerald, David, Mike, Lynda and Michele.
LaVaughn was very active in the St. Ann’s Catholic Church where she served on the altar society, St. Ann’s booster Club and was a Lay Minister. She was also a American Red Cross Volunteer, a 4H leader and fair Chairman and served as a precinct election captain. She also served in various positions in the Catholic Church in state and national offices.
LaVaughn enjoyed watching sports, especially tennis and did extensive traveling all over the world. She was also known for her custom draperies that she made and her many quilts.
She is survived by three sons, Gerald and wife Cindy of Lexington, David and wife Lisa of Scottsdale, Az., and Mike and wife Judy of Phoenix, Az.; two daughters, Lynda and husband Rich Grandgenett of Tekamah and Michele and husband Mark Ferguson of Columbia, South America; sixteen grandchildren, twenty-five great- grandchildren and two great-great grandchildren.
LaVaughn was preceded in death by her parents, husband; Michael in 2001, and two brothers, Paul and Gordon.
A memorial mass will be held Thursday, November 14, 2019 at 11:00 a.m. at St. Ann’s Catholic Church in Lexington with Father Matt Koperski, officiating.
Inurnment will be in the St. Ann’s Cemetery prior to the memorial mass.
In lieu of flowers memorials are suggested to the St. Ann’s Cemetery.
Reynolds-Love Funeral Home in Lexington is honored to be assisting the family with arrangements. Please share online condolences with the family by visiting: reynoldslovefuneralhome.com