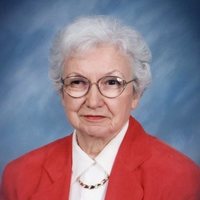 She was a life-long educator, primarily of home economics, the education of home economic teachers and administration. She began teaching immediately after high school graduation at a one room school house in Dawson County NE and retired in 1986 as the Dean of the College of Home Economics at the University of Nebraska, Lincoln. In between were positions at Lyons, NE high school, University High School in Lincoln, Michigan State University, and Iowa State University, before she returned to the University of Nebraska-Lincoln in 1963. She held a strong belief in the importance of education and encouraged students and colleagues to develop to their full potential.

After retirement, her desire to educate continued with her interest in teaching senior citizens to avoid scams and she spoke to many groups about the subject.

She participated in and held leadership positions in state and national vocational and educational associations and organizations and received several honors in recognition of her efforts and contributions.

She was an active member of the First Presbyterian Church in Lincoln.

She loved to travel and did so extensively. After retirement, she took up the game of golf. She made dolls for friends and family.

She was devoted to her family. Her four brothers, Harold, Francis, Rowland, and Robert and their families were frequent occupants of her guest room. Those family members who attended UNL (and there were several) were treated to Sunday evening dinners and the use of Aunt Hazel's laundry facilities.

Dr. Anthony was preceded in death by her parents, LF. and Elizabeth Anthony, and her four brothers and their spouses. She is survived by her nieces and nephews, Karolyn (Ken) Scheneman, Jean (Dr. Les) Morrow, Judy (Wayne) Howard, Don (Linda) Anthony, Janet (David) Quitmeyer, Cliff (Deb) Anthony, AnnaLou (Galen) Stehlik, Dr. Russ (Pam) Anthony, Tim (Marita) Anthony. Also left to cherish her memory are her many grand nieces and nephews and their families, along with friends, colleagues and former students, to whom she was an inspiration, role model, mentor, and friend.

A celebration of Dr. Anthony's life will be held at the First Presbyterian Church in Lincoln at 10:00am on Thursday, Nov. 7, 2019 followed by inurnment in Greenwood Cemetery, Lexington, NE at 3:30pm.