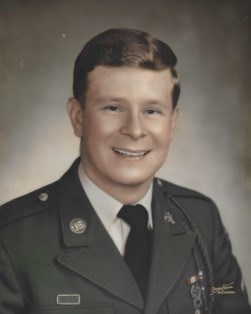 Mass will be held at St. Ann's Catholic church in Lexington, Nebraska and a rendering of military honors will be held at the Missouri Veteran's Cemetery, Springfield, on dates yet to be determined.

The fourth of seven children, Jack was born on August 26, 1944 in Hastings, Nebraska to Brigid Maloney Haines and Elmer "Lefty" Haines. On October 22, 1978 he married Margot Hintelmann Olson in Grand Island and became an instant father … "the dad he didn't have to be".

Jack attended St. Ann's Catholic High School in Lexington, where he was crowned Homecoming King, graduating with the Class of 1963.

In 1966, Jack joined the US Army serving one year and eight months overseas including a tour in Vietnam. While the Vietnam War deeply affected him for the remainder of his life, he always spoke fondly of the local women, children and babies he served while his boots were on the ground, and he wore his "Vietnam Veteran" ball cap with pride.

Jack was an active member of his church and an avid collector of many things, but guns, knives and baseballs were his favorites. He loved sports … especially baseball and Nebraska Husker's football …. and he was a huge NY Yankee's fan, just like his mother. He will be remembered for his love of God, Family, Service to His Country, his warm, patient demeanor and witty, eccentric sense of humor.

Jack was preceded in death by his wife and his parents.