Don '62 & Sondra '62 (Chubbuck) Schmitt
We were married at Lexington, Nebraska on 7/10/1964. Don was in college and Sondra worked at Farmers State Bank, Lexington. In January, 1967, Don graduated from Kearney State College. Don worked at General Telephone of Midwest in Grinnell, Iowa for a year and half. Then Don went to work for Burroughs Corp., in Lincoln, Nebraska. Sondra worked at First National Bank in Lincoln.
In 1970, Don was promoted to Territory Manager in North Platte, Nebraska. Sondra was hired by First National Bank, North Platte. In 1974, Don was promoted to Zone Sales Manager in Salina, Kansas. Don had five salesmen reporting to him -- three in Salina and one in Hays and one in Colby. In 1977, Sondra went to work for Salina Coffee House (later name Sunflower Restaurant Supply). In 1978, Don went to work for Blue Beacon as controller. In 1979, Don was hired by Kansas Wesleyan College as their Business Manager. In 1986, Don went into business for himself as salesman for Nuts Etc. by Schmitty a distributor of Mountain Man Nut & Fruit Co. In 1999, Don had a stroke that end his business career. Don can still drive and walk at the YMCA.
On 2/8/2010 Don had carotid surgery on the right side. Sondra retired from Sunflower Restaurant Supply with 33 1/3 years of service on April 30, 2010. We have two children Renee and Jeff, five grandchildren Logan and Ashley Schmitt: Caitlin, Noah and Joshua Corn.
Don can be found on Facebook
posted on August 8, 2010 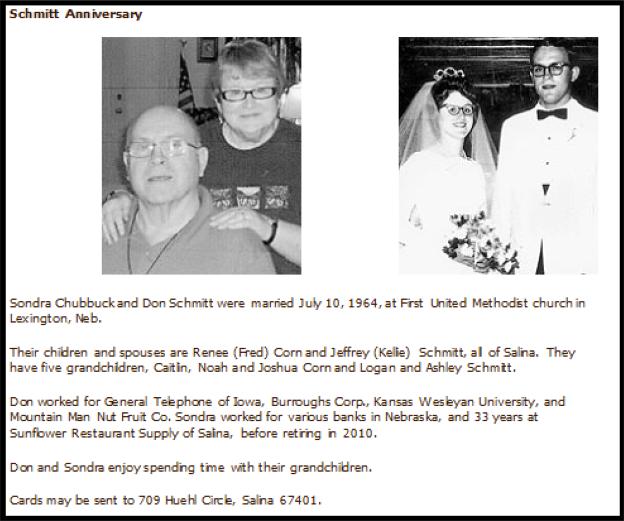